We’ve actively been integrating with HP ALM for a while now, but with our release of Awetest 2.3 we’ve revved up our existing integration using the HP ALM REST API and built deeper integration with the ALM Test Lab, Test Plan, and Defects modules to further enhance the interoperability between Awetest and HP ALM.  Our efforts around the HP ALM REST API Integration also served as a catalyst for publishing the Awetest API which we will be including in our upcoming release.

HP ALM (Application Lifecycle Management), or Quality Center as many still refer to it, continues to remain the cornerstone of many Enterprise QA departments, and integrating with it further reinforces our commitment to integrate with the existing tools & technologies in the enterprise QA & IT ecosystem.

The integration with the ALM Defects Module allows Awetest users to log defects directly from the Awetest Reports section along with all the available meta data (e.g. steps to reproduce) pre-populated at the time of defect submission directly in a simple browser-based interface without ever leaving your Awetest interface.  In addition to using ALM as the central Defect Management tool, the Awetest-ALM integration allows you to maintain complete traceability through the integration with the Test Plan Module and allows you to present a more comprehensive dashboard of your automation (vs. Manual) testing directly in ALM.

Getting Started: Setting Up HP ALM on Awetest

Setup takes less than a minute, and only requires the user to input their HP ALM credentials in the Awetest server under Management > ALM Server section. Click “Add ALM Server” and enter your login details. 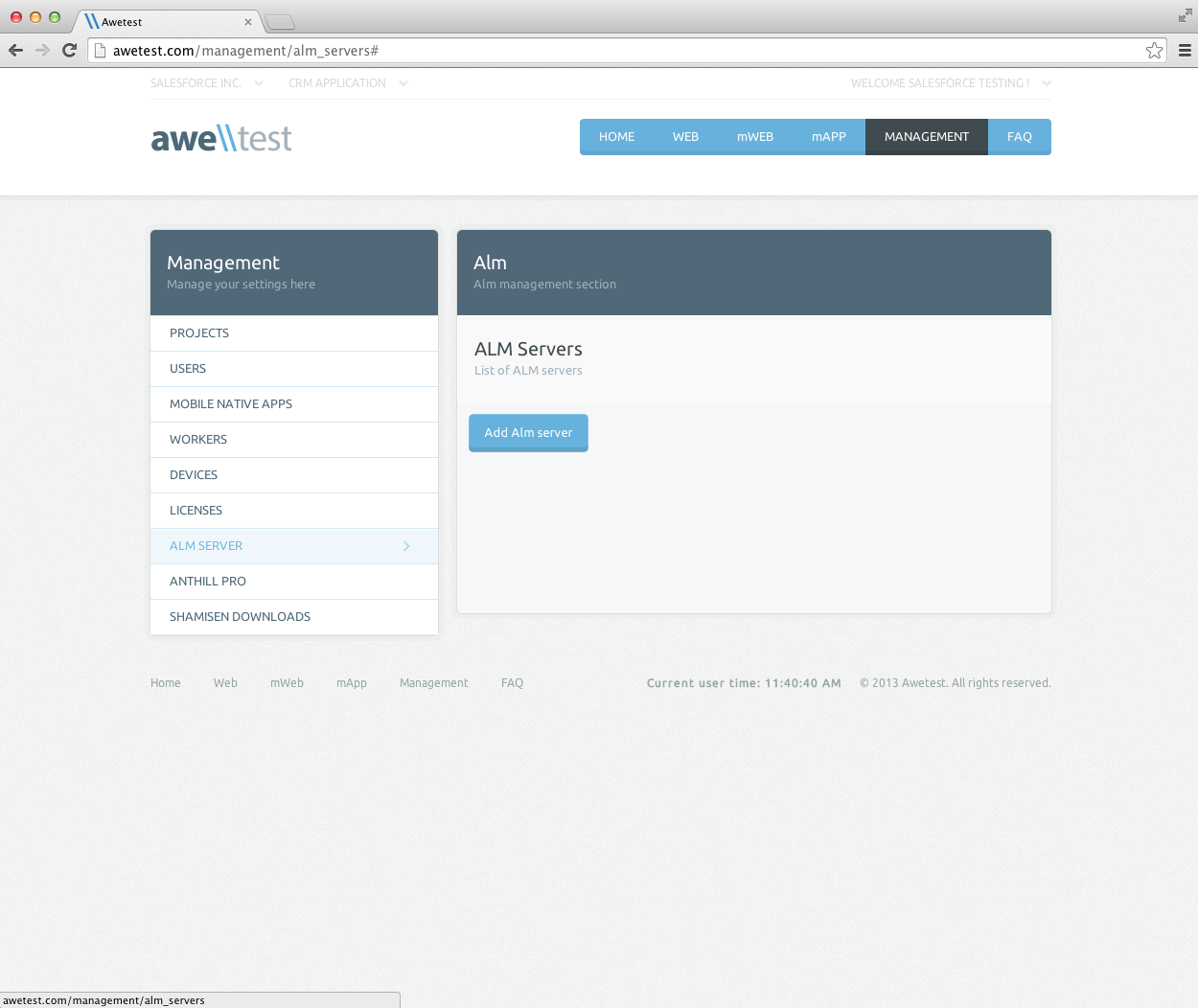 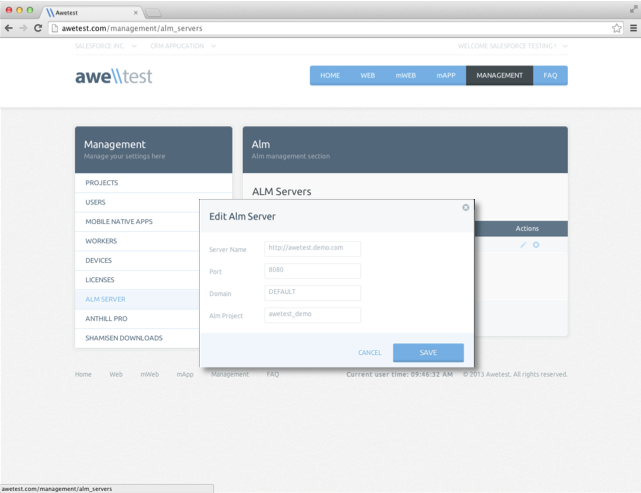 After having set up your HP credentials on Awetest then a new section will appear- ALM Folders. All you need to do is click “Create” under “ALM Folders” and it creates the skeleton folder structure in ALM with all the Awetest modules you have available.  Any Awetest company project integration maps to a specific ALM project, making the integration very scalable, and you can have multiple projects mapping to each other from a single Awetest and single ALM instance. 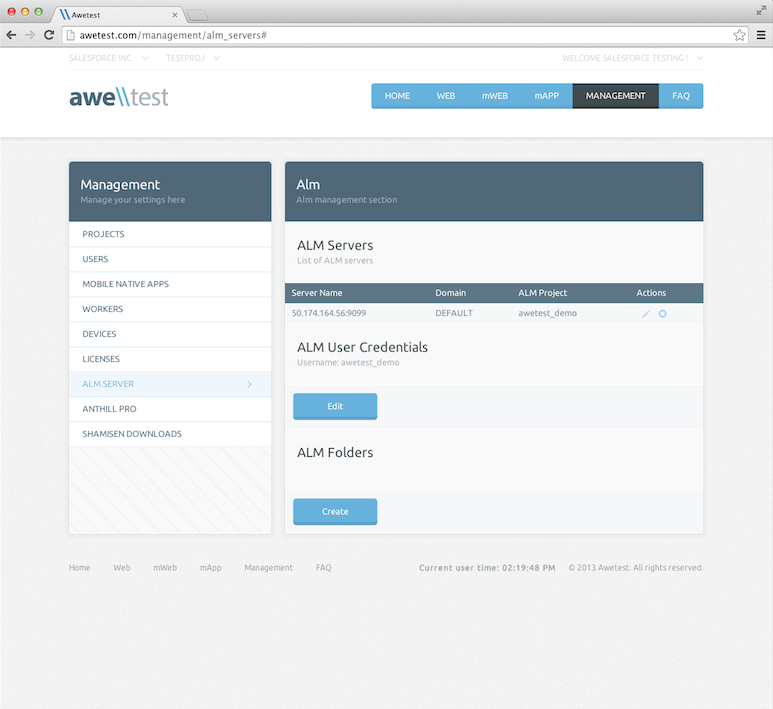 If you have HP-ALM activated and configured, after you run any job you can go into Awetest Reports section you will see a Bug Icon alongside any defect that is occurred during the test. 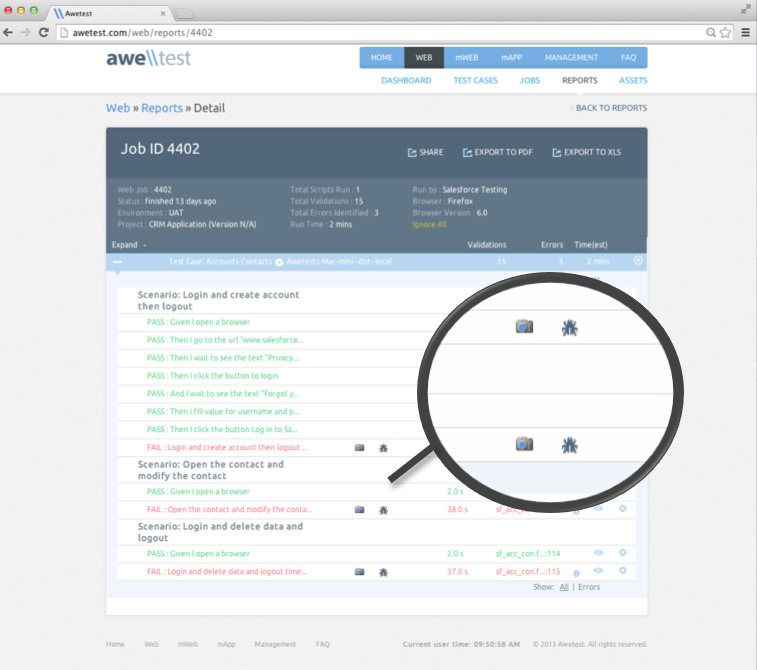 The bug icon, displaying next to a failed step

The camera icon next to the bug is one of the great new features in Awetest 2.3 where screenshots are now automatically taken at the point of failure and shown in the reports for added traceability. 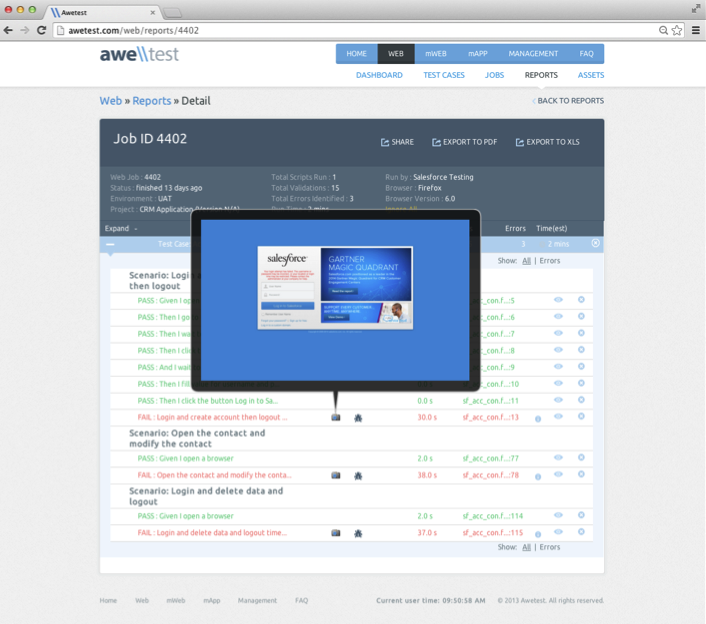 Screenshots are available at the point of failure

By simply clicking the bug icon, your HP-ALM Defect logging form will pop-up.  This form is built dynamically with the specific fields that have been defined for that particular ALM Domain-Project combination. You only need to enter the Summary title & the severity of the defect, and then the user can modify details as needed. 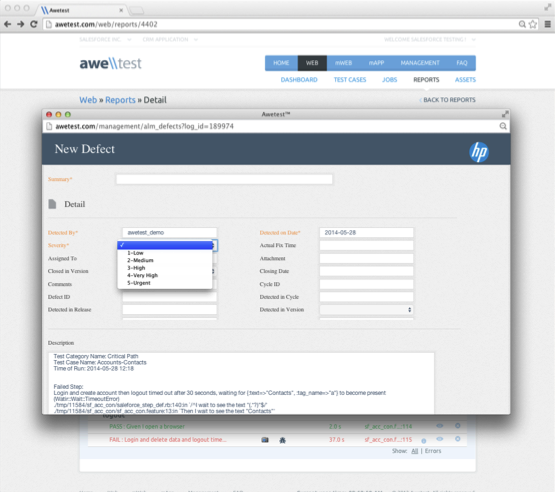 Awetest pre-populates all the meta data associated with that particular failed validation – so the Test Case, Error Logs, Time of Failure, Steps directly preceding the fail, etc. are all pre-entered into the defect form. The defect will now be logged within ALM and can then be modified directly in ALM after the fact.