The newest version of Awetest has revved up our existing integration and incorporated an even deeper integration with HP ALM to enhance the communication between Awetest and the ALM server even more.  We’ve built atop the HP ALM REST API to continue to evolve our integration with ALM as Awetest has matured into a fully-featured cross-platform automation solution because HP ALM is the cornerstone of many Awetest Enterprise customers’ QA tracking & reporting needs.

This post is focusing on our integration features with HP’s Application Lifecycle Management Platform Test Lab Module, which allows for our Awetest users to seamlessly sync their test results from Awetest into ALM with just the click of a button. By clicking the ALM sync button your Awetest test results will show up as a separate test set in HP ALM. Allowing users to selectively sync the details and results of any Awetest jobs (test cases) executed along with complete traceability back into the ALM test cases and the ALM Requirements.

This coupled with our integration with HP ALM’s test plan, and defects module means that Awetest has comprehensive integration with all of the major ALM modules, giving ALM users complete visibility into their automated tests being executed through Awetest.

First, to begin any communication between Awetest and HP ALM one must setup HP in Awetest, which takes only a few seconds. For simple setup instructions you can go here.

Once your job has been executed in Awetest, and the run has been completed, you can see the results in the Awetest Reports section.

If you have HP ALM activated and configured on Awetest you will see an ALM Sync icon on the report header. Simply clicking the ALM sync icon will sync all the results in the Test Lab module where the synced Awetest Job will now show up as a separate test set in HP ALM. By refreshing HP ALM and clicking on the specific Test Plan module it reveals a specific line item for each Awetest Test Case, Script, or Feature File that was executed and the corresponding result – Pass or Fail. 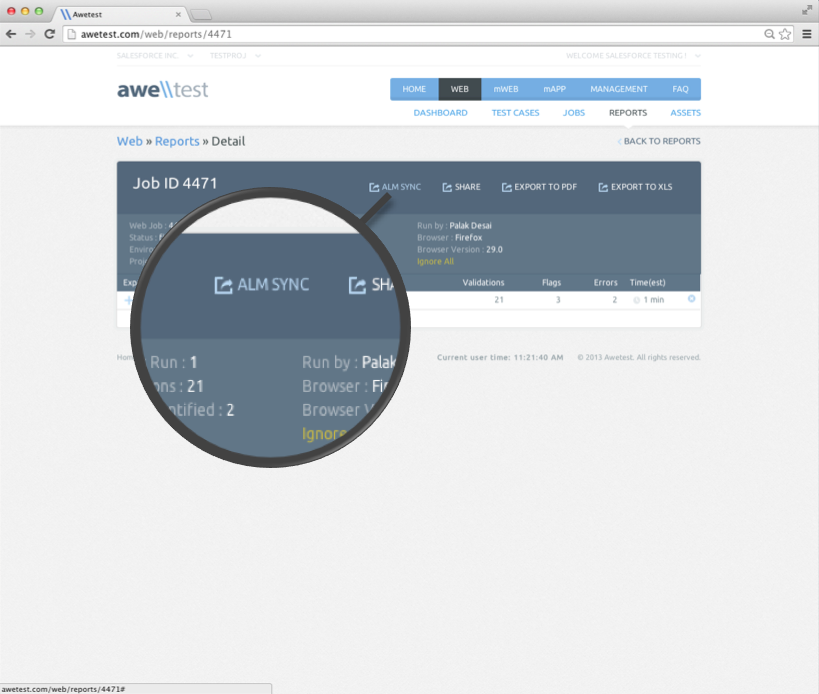 The ALM Sync button is found near the Job ID header

In your test set Awetest can also submit the detailed PDF or Excel report for a given test run so that the user can see the detailed validations and identify the exact cause for the fail making this very actionable and with complete traceability back to the specific feature that was executed and corresponding test that was sync’d to the Test Plan module. Exporting in these formats can be done in the same header as “ALM SYNC”, with “EXPORT TO PDF”, and “EXPORT TO XLS”.

Here we see the corresponding case in ALM

Above is what your folder structure will look like when you sync with ALM. You can see that the specific job (#4471) and the job details are all transferred over from Awetest into ALM.