One of the big features in the Awetest v2.3 release was the deeper integration with HP ALM using the ALM REST API. As we've mentioned in the past, HP ALM remains the cornerstone of many Awetest enterprise customers' QA tracking and reporting needs, which is why we've continued to deepen our integration with HP ALM as Awetest evolves into a more full-featured cross-platform Automation solution.

The setup of HP ALM takes only seconds on Awetest and incase you need it the simple setup instructions can be found here.

In the Awetest Web Module, navigate to the Test Cases section and click the specific category you want to sync with the ALM Test Plan module. Clicking the button “Sync with ALM” allows you to sync a specific Test Category and all the "child" test cases (for that category) directly into the Test Plan Module. In ALM an individual Test is created for a given Awetest Test Case-Script or Feature File which is also uploaded as an attachment in the ALM Test.

You can sync all test categories and cases by simply clicking the "Sync All with ALM" link and everything for the Web Module would be synced over to your corresponding HP ALM Test Plan instance. 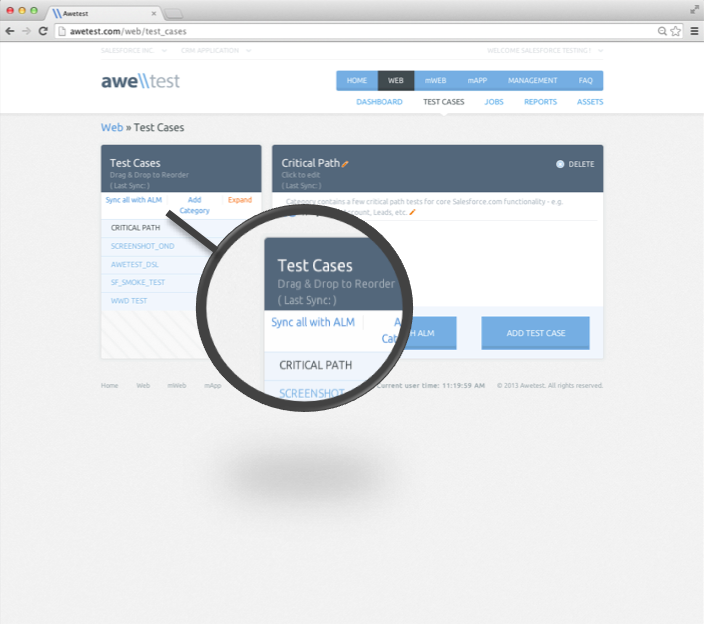 Click the link to initiate the test case sync with ALM 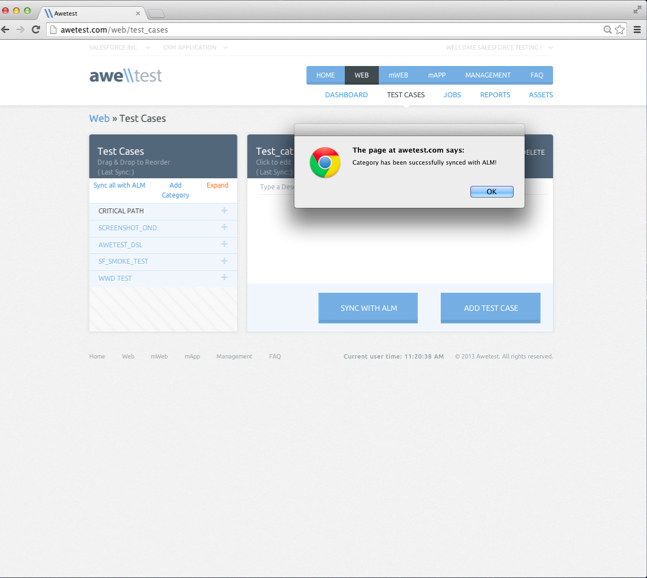 A message displays after syncing

Here you can see the test cases folder structure has been synced directly into HP ALM within the Web parent folder.

As you can see above the Web parent folder, the HP ALM Integration extends to the mAPP and mWEB modules allowing you to sync your Mobile Automation Tests & Assets directly to HP ALM and giving you complete traceability into your Mobile automation tests directly in ALM.

This gives you a simple way to sync all your Awetest Test Categories, Test Cases, Scripts and any other meta data directly into HP ALM.  This coupled with Awetest integration with ALMs Test Lab and Defects modules give you comprehensive integration with all the major ALM modules giving ALM users complete visibility into their automated tests being executed through Awetest.

Below is a video that walks you through the integration between Awetest and the HP ALM Test Plan module:

Be sure to check the work we've done around integrating with the HP ALM Defects Module and the ALM Test Lab Module.  We'd love to hear from you and find out more about your ALM integration efforts.