The last 6 years have been a challenging, yet rewarding journey for us at 3Qi Labs. We have conducted millions of tests using a variety of open source technologies for numerous applications, in companies and projects of varying shapes, sizes and geographies. In creating, executing, and maintaining these tests, we’ve come to realize something very important regarding writing automated test scripts:

HOW you build your automation (The design and architecture of the scripts and supporting framework) is vital, and even more important than WHAT you are building it to do (Functional coverage, number of tests, complexity of logic, depth of testing, etc.).

Lately, we’ve been running a lot of BDD (Behavior-Driven Development) testing  using our favorite workhorses: Cucumber, Ruby, & Selenium WebDriver. In testing through these (and in addressing best practices for our growing team), we’ve come up with a simple set of frameworks and rules to focus our processes and methodology. A big one for us is the 30-30-30 rule:

The above list refers to components of  a Cucumber Feature File, and a corresponding Step Definition in Ruby. As a refresher, a Cucumber Script is called a Feature File, containing a Feature Definition, Scenario, and Step. Our Feature Definition describes what will be tested (in this case, the Zoho CRM Leads and Accounts Happy Path Tests). The Scenarios break up the Feature into individual, executable tests for specific functionalities (such as Creating & Deleting a Lead or Account). Within the scenario, the Step is the individual command that will be running for the given line (Creating a new account, confirming deletion, etc.). The example for the described feature file is as shown below: 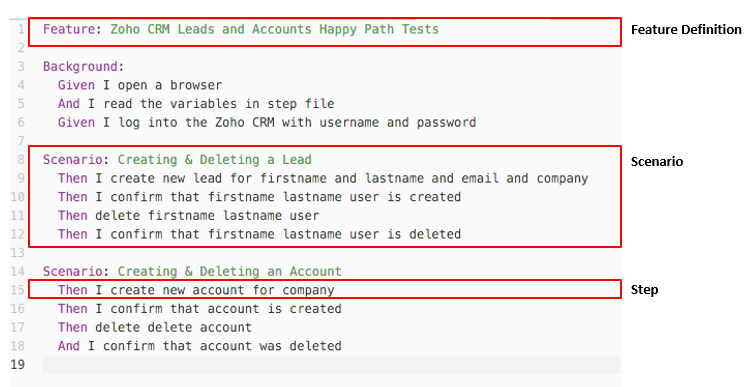 Breaking down a Cucumber Feature File. 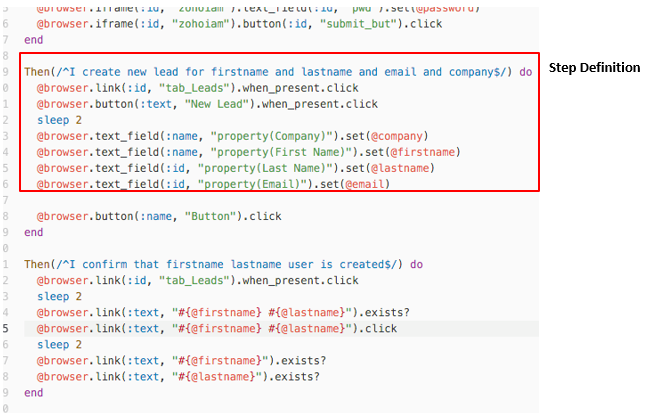 In developing the 30-30-30 rule, we focused on a few key automation concepts, and observed how applying the rule created a higher quality automation experience:

Now, we know nothing is set in stone, and we realize that the 30-30-30 rule has to be broken from time to time. Depending on the complexity of the applications and scenarios involved, you may have to add more steps/code/scenarios to support your testing. These cases vary, and we ensure that our analysts have a concise reason for needing to break this rule.

Take time to think about this rule, and how it can pertain to writing automation test scripts. If you find that your code is more often than not cluttered, hard to read, and seems like a chore to debug/enhance, try applying the 30-30-30 rule to your scripts. Feel free to let us know if there are similar rules that you enforce in your automation approach.