Exactly as the title suggests, your application will probably only have one chance to sway someone into becoming a user, because if you disappoint the first time, you can bet (with 84% confidence) they won't be back.

Exactly as the title suggests, your application will probably only have one chance to sway someone into becoming a user, because if you disappoint the first time, you can bet (with 84% confidence) they won’t be back..

Nowadays apps need to run perfectly with every release because modern consumers have extremely low tolerances for buggy apps. According to a report by Compuware, only 16% of users said they would try an app that failed more than twice. You don’t want your app to have one buggy release then lose a chunk of its users.

How Can This Be Avoided?

THROUGH TESTING. The following are reasons why testing needs to be a priority for your application:

With the mobile app market exploding with nearly 139 BILLION app downloads predicted in 2014 alone, consumers have a lot of choices. There is too much competition in the app world for yours to have a major bug, because the user will just easily move onto the next app and forget about yours.

Living in San Francisco, a notoriously unfriendly city for cars, I personally have 5 different ride-sharing/car service apps on my phone. If no Lyft drivers show up on my screen I can go to Sidecar, if Sidecar doesn’t load then I can go to Flywheel, etc. If any of these apps fail me more than once I can delete the app with no problem because I clearly have other options.

Over the last 2 years – I haven’t had to visit a bank/ATM for any reason because I can deposit checks through an app, and take out money when I’m at the grocery store. The amount of non-voice activity done on phones is exponentially increasing; we can accomplish nearly any task through mobile apps so we’re constantly capable of getting things done.

If an app I’m using stops performing properly or helping me achieve my goal I would not wait around for the next release for the bugs were worked out. I would want the problem fixed immediately and if it weren’t I would probably find another app. 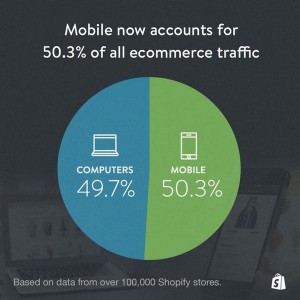 The Computing Power, capacity of phones today is catching up to what desktops offer. This can be seen in the steady increase of processing power offered by iPhones. The iPhone 4 is powered by a 1GHz A4 chip, the iPhone 5 has it’s dual-core CPU running at 1.3GHz and the iPhone 6 is running at 1.4GHz (which is currently faster than most quad-core Android processors).

People are starting to rely more on their phones than their desktops- there has been a major shift in desktop use. Shopify reports that mobile has now overtaken desktops for eCommerce transactions. With phones and applications now capable of doing so much more (and so much faster), that means that all of their functions need to be tested.

Mobile is exploding, by 2020, 90% of the population will have a mobile phone, and the Google Play app store revenue is projected to have a 4x increase in revenue between 2013-2017, growing to $5.2 Billion. It’s clear that there is just going to be more apps available on more devices as time goes on.

Last but not the least – people are becoming more aware of the security issues (and consequent risks) that could have long-term impact when it comes to mobile security. As stated before, now that we are using our mobile phones to do nearly every task that opens us up to more risk if the apps we are using aren’t secure.

You can now apply for a bank loan through an app as well as remotely unlock your house, control your appliances, or make a payment. Our mobile apps hold immense responsibility in keeping those functions safe and secure. These need to be tested to make sure nothing goes awry.

With the Apple Apps Store and Google Play Store each having over 1 Million apps available, there is no lacking for apps to test. Coupled with ridiculously short attention spans and viciously unforgiving consumers –  the need for  testing is there, but it clearly needs to be made a priority.  This need is further exemplified by the fact that only 50% of CMOs have a mobile testing strategy in focus. So remember:

Your app doesn't get a second chance to make a first impression. #testit