Within the last year, the CNCF (Cloud Native Computing Foundation) released a survey sent to 1,337 professionals from primarily technology and software backgrounds regarding a variety of topics related to cloud computing, including identifying trends in software development and releases. We dived in to pull some stats we found interesting and analyzed their implications on software testing and the QA industry. 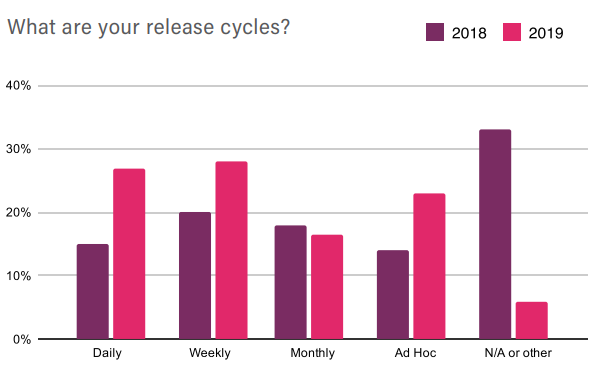 From a software quality perspective, increased release cycle frequency increases the potential for defects and broken functionality. As a direct response to the exponential rise in releases, the ability to swiftly evaluate the code prior to release has to scale up as well. Capgemini’s latest World Quality Report indicates pain points still existing for companies attempting to scale up automation efforts – 50% of their respondents reported an inability to apply test automation at appropriate levels. 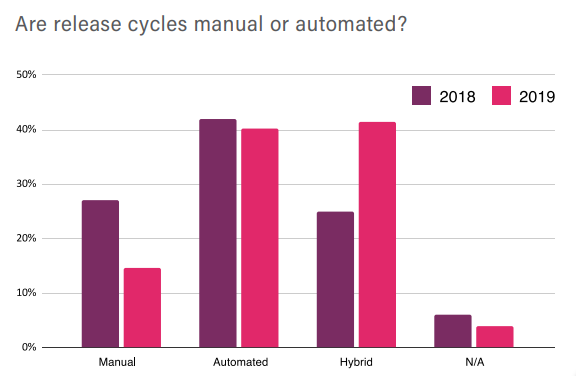 An increase in the prevalence of frequent release cycles can be directly attributed to the rise of DevOps, CI, and CD. Thanks to tools such as Jenkins and Gitlab CI/CD, manual releases saw a decrease from 27% to 14%, and an increase in hybrid (combining manual and automated tools) releases from 25% to 41%. With existing tools surrounding release automation improving and the need for frequent releases still rising, we’re expecting to see the continued growth of hybrid and automated approaches.

Where is the Cloud? 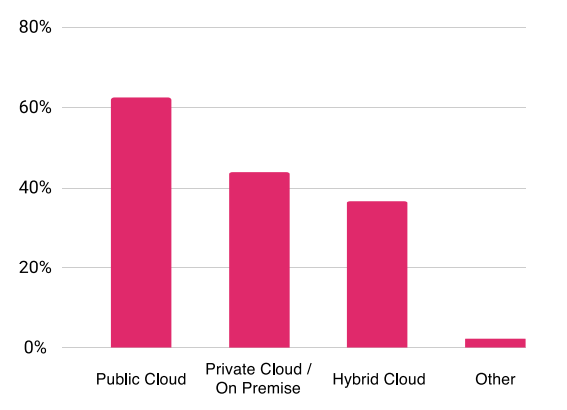 It’s no surprise that the majority of respondents are still utilizing a public cloud approach. Due to scalability, lower set up cost, and reliability, the ease of public cloud has made it a go-to choice for a large number of teams globally. However, the number is down to 62% from 77% last year – and an increase in hybrid and private cloud approaches indicates that respondents are looking for more flexibility and customization with their infrastructure. With data breaches increasing yearly, enterprises looking for a more secure solution to data storage/processing will find what they’re looking for with hybrid and private cloud environments.

Public or private, overall cloud adoption is still increasing across multiple industries, even given our current economic climate due to COVID-19. Enterprises that have just switched over to cloud-hosted software will face a variety of challenges in the form of functionality, performance, and load testing to ensure that their products are still maintaining (and hopefully exceeding) the same standards of quality as they were before switching.

Simply put, widespread access to scalable and robust infrastructure allows for an increase in deployment rates, necessitating an equivalent increase in testing efforts. As the saying goes, “a rising tide lifts all boats”. And when it comes to scaling up, going the way of automation in both releasing and testing software remains king. With Amazon famously declaring their engineers deploy code every 11.7 seconds on average (after moving to their own cloud), technology teams across various industries will have continued the pressure to deliver products quicker and prevent any chance of stagnation through continually bettering user experiences. We don’t see that changing any time soon.