3Qi Labs recently announced the release of Awetest in the Amazon AWS Marketplace. Awetest is a simple, quick-to-deploy framework that facilitates all aspects of your functional, responsive & API automated testing, across Web & Mobile Applications.

Awetest in the AWS Marketplace 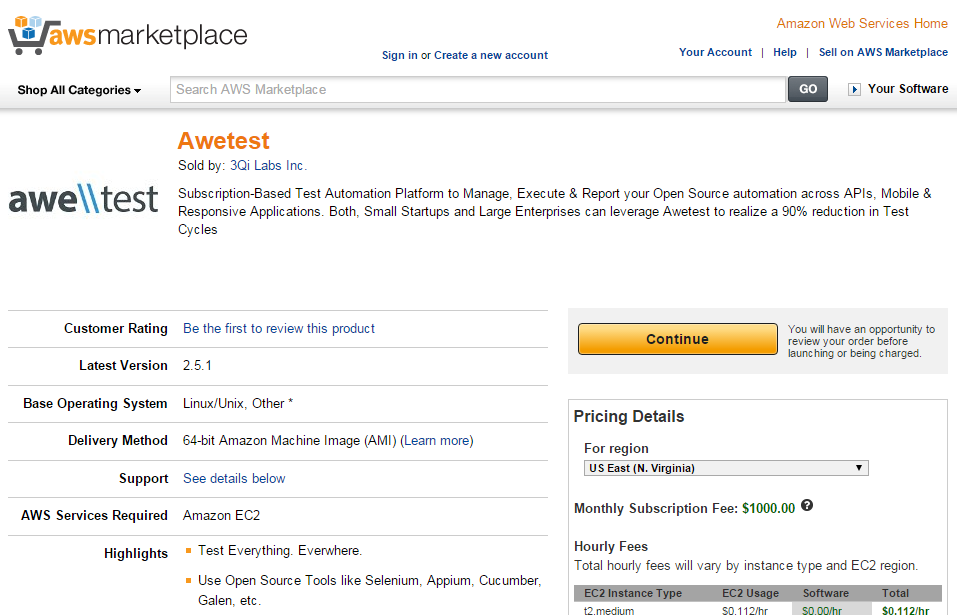 3Qi Labs recently announced the release of Awetest in the Amazon AWS Marketplace. Awetest is a simple, quick-to-deploy framework that facilitates all aspects of your  functional, responsive & API automated testing, across Web & Mobile Applications.

The AWS Marketplace is an online store where, as a subscriber, you can find, buy, and quickly deploy software that runs on Amazon Web Services (AWS). This software is available in the form of Amazon Machine Images (AMIs). An Amazon Machine Image (AMI) contains all the information necessary to boot an Amazon EC2 instance with your software. An EC2 instance is the virtual computing environment available from the Amazon Elastic Compute Cloud (Amazon EC2) web service

Awetest’s presence on the AWS Marketplace will allow a direct and convenient way to access Awetest for AWS users. It also has a few notable benefits. This stems largely from Amazon’s Elastic Compute Cloud (EC2). EC2 is an on-demand, pay-as-you go cloud service, offering superior speed and flexibility with which a server can be set up. We have had increasing requests for cloud deployment over on-prem, and leveraging EC2 is a terrific way to start.

As a cloud service, EC2 allows you to launch Awetest on a server customized to your exact specifications – on-demand.  As the components of the server are already built, deployment takes a matter of minutes; define your specs and continue the process. So you can have the entire Awetest application up & running on your infrastructure in a matter of minutes!

Using Awetest on AWS allows you scale up (and down) on-demand.  On-Premise deployments typically involve the traditional setup steps – generating POs, Provisioning servers, Building the box, deploying, etc. Depending on the organization and the security protocols & change management processes –  adding 1TB of Storage can take anywhere from a day to a month (We’ve had first hand experience with this at one of our customers!).  Adding additional infrastructure to facilitate increased load, usage could take significantly longer…

With the cloud, and EC2 specifically, you will have your specifications set up to accommodate your desired initial usage. To accommodate the increased load, usage or throughput, you can simply beef up your current configuration (cores, memory, storage, etc.) as needed – within minutes – all from the easy-to-use AWS console; This gives you on-demand (and infinite) scale to meet the exact specs of your project. Scaling down is as easy as scaling up – where you could adjust (downwards) directly from the AWS console.

A key feature of EC2 is the ability to “pay only for what you use”. As mentioned earlier, this effectively allows you to define your infrastructure specifications (cores, memory, etc.) on the fly and ratchet up & down as needed.  Sourcing, Setting-up physical server infrastructure is an expensive, up-front cost.  This coupled with the ongoing maintenance costs is making the physical/on-premise infrastructure prohibitively expensive

Choosing to utilize the AWS on-demand servers for Awetest entirely bypasses the entire traditional infrastructure provisioning process, and more importantly allows you to utilize the capacity you need, nothing more, and nothing less. On the other hand, deploying Awetest on AWS has clear benefits:

Deploying Awetest on EC2, gives users complete flexibility, spending no more than you need to in order to achieve your testing goals.  Cutting down the Awetest Deployment time from days to minutes ensures you can be up & running in under a day.  Finally, the flexibility of having a much smaller, variable cost in paying for only what you use is a an easy choice over a large, up-front fixed cost needed for physical infrastructure.

Thanks to AWS enabling ease of deployment, low cost, and scalability, accessing Awetest has never been easier. Combined with our automation expertise and support services (ranging from training to full scale QA), Awetest in AWS provides a great foundation to adopt and expand your test automation effort.

Awetest is available today in AWS Marketplace on a subscription basis: https://aws.amazon.com/marketplace/pp/B015CPOSVY